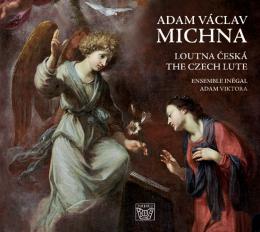 Perhaps the best known Czech baroque collection is the set of songs entitled Loutna česká (The Czech Lute) dating from ...

Perhaps the best known Czech baroque collection is the set of songs entitled Loutna česká (The Czech Lute) dating from 1653. Its author was Adam Václav Michna of Otradovice (30. 6. 1600–16. 10. 1676) – composer, poet and musician who lived all his life in Jindřichův Hradec in Southern Bohemia. The set contains 13 songs linked by a common thread – like a song cycle.

Perhaps the best known Czech baroque collection is the set of songs entitled Loutna česká (The Czech Lute) dating from 1653. Its author was Adam Václav Michna of Otradovice (30. 6. 1600–16. 10. 1676) – composer, poet and musician who lived all his life in Jindřichův Hradec in Southern Bohemia. The set contains 13 songs linked by a common thread – like a song cycle. It was probably meant for domestic music making, although its content is clearly sacred in nature. The songs describe the marriage of a human soul in three stages: courtship, engagement and wedding celebration. Just like the pieces in Czech baroque kanci¬onály (song-books), the songs in the Loutna are strophic. Each one is set to verses in characteristic Czech, full of folk expressions, sayings and turns of phrase, metaphors and Biblical quotations, telling the story and implications of a spiritual marriage. Historically the set is remarkable and significant both from the musical and the literary angle, since it is the first example in the Czech language of the ritornello type of song, each piece being ushered in by an instrumental introduction – a ritornello. It is also exceptional as to its contents, since its texts are imbued with a strange erotic mysticism mixed with folk-like elements. Because of its use of the vernacular language the Loutna is also an important part of the Czech baroque literary heritage. Its the¬me is linked to the Marian cult – a leading type of baroque worship – even though it also draws on Terezian mysticism popular at the time, the Song of Songs and various stories from Classical times, as well as motives from nature and human life in general. Songs from 'Loutna česká' have been a living part of Czech musical culture for centuries, incorporated in many editions of popular song-books by Václav Holan Rovenský and Matěj Václav Šteyer. They have also been much copied and thus spread among the population. They conti¬nue to be used by singers and musicians, often without awareness of their original purpose.

The Loutna collection was discovered in the 1920s by the musicologist Emilián Trolda. But it was not complete. What he found was a copy, dating from the second half of the 17th century and containing just part of the organ continuo and one vocal part of all the songs. Beside that, Trolda also found a printed copy of the complete organ part at the library of the Strahov Monastery in Prague. In 1943, drawing on these incomplete sources, he published the first edition or, rather, a reconstruction of Loutna. He only included the songs, because of insufficient sources for the instrumental interludes.

Then in the 1960s another source was found at Soběslav – a printed particello containing two vocal parts of the songs and their organ accompaniment. This became the basis for the song section in a new edition of the Martin Horyna collection (1984) which led to a great many performances and arrangements, including Michal Pospíšil’s attempt at completing the composition of the ritornellos and the instrumental parts (1998).

The Natural History Museum at Slaný is in the posession of the library of the former Franciscan and Piarist monastery. Among its many valuable old tomes there is also a very rare bundle of three printings of vocal polyphony from the early 17th century. In the bass set in this bundle there was found in January 2014 a print of the first violin part from the Michna Czech Lute collection. This unique find has never been parallelled at any other archive or library in Europe. The bundle itself, together with the Soběslav partice¬llo, form the complete collection. The newly discovered first violin part consists of two sheets measuring 31 x 19cm, printed on both sides and folded, so that the result measures 15,5 x 19cm. The first violin part here represents the top melodic line to all the ritornellos which introduce the individual songs of the collec¬tion, plus the two songs nos. XI and XIII.

The newly discovered first violin part is the principal source for the understanding, reconstructing and freshly recording of the complete set of Michna’s Czech Lute. Together with the Strahov print of the organ part it represents a clear melodic and harmonic basis for the ritornellos, while suggesting how the instru¬ments were meant to be used throughout the collection. Judging by some notes in the discovered violin part, it seems more than probable that the instruments - except the thorough-bass accompaniment which is used in all the pieces, including the ritornellos - played together with the voices throughout, except in the song no. XI “The Wedding Day“ which is marked “Canto & Violino“. Since the instrument is denoted in the singu¬lar, it can be taken to mean the first violin. The song no. XIII “The Sorrow of Erring Maidens” on the other hand is marked “Canto & 3 Violae”. It is clear, therefore, that in that ritornello and song three string instru¬ments were meant to be involved, and it seems very probable that “only” three viols were used, accompanied by a keyboard instrument, i.e. continuo. The use of instruments in Michna’s Czech Lute was in effect much more restrained than has been generally assumed and practiced by musicians up till now.

Lenka Torgersen  -  violin I, viola I