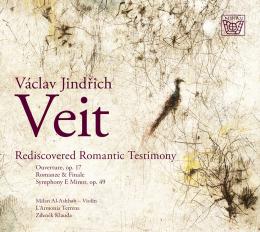 The name of Václav Jindřich – Wenzel Heinrich Veit (1806–1864) is known today practically only tospecialized music historians, and a ...

The name of Václav Jindřich – Wenzel Heinrich Veit (1806–1864) is known today practically only to
specialized music historians, and a few enthusiasts for ancient music. The name of this Czech-German
composer, pianist, publicist and organizer of musical life in Bohemia in the first half of the 19th century
is probably completely unknown to the wider audience. And yet Veit was in his time an important and
popular composer, whose work was respected abroad – especially in German speaking countries.Veit was
of German nationality, but he was an avid Czech patriot, as it was usual in his time. Therefore, placing him
in Czech musical culture is entirely appropriate.
With the arrival of Bedřich Smetana, Veit's prestige receded, which happened to other composers of
the "pre-Smetana" period too. Smetana overshadowed the personalities of Veit's format both naturally and
also due to the rising Czech music journalism and historiography measuring the values of Czech national
music by the genius of Smetana, and thus causing a gradual loss of interest in Czech pre-Smetana music.
For a long time, the last in-depth treatise on Veit was written by the music writer Artuš Rektorys.
It was published in four sequels in Dalibor magazine on the occasion of the 100th anniversary of Veit's
birth in March 1906. In the following period, Václav Jindřich Veit was mentioned only briefly in various
general treatises on the history of Czech music and, of course, in publications on Smetana. It was not
until the 100th anniversary of Veit's death (1964) that a regional researcher and a music writer Karel Fiala
published a small monograph. This was followed by a brief entry in the Czechoslovak Music Dictionary of
Personalities and Institutions (1965) and then only a rather brief replica of it in the year of the 210th birth
anniversary (2016) in the online Czech Music Dictionary.
Up to now the period of Czech Early Romanticism is generally considered a fallow period without
significant musical achievements, on whose barren ground the creative personality of Bedřich Smetana
miraculously sprouted. Of all the composers of this period, František Škroup is the one who is mentioned
most often, but usually only as the author of the song Kde domov můj. These days such a perspective is
completely untenable. This period is significant not only for the crucial musical and historical facts, such
as the founding of the Prague Conservatory (1811) and the organ school (1830 – from which, not the
conservatory, three of the most important composers and Smetana’s followers – Dvořák, Janáček and
Foerster- emerged), but also for composers who prepared the ground for Smetana himself.
And our Václav Jindřich Veit is one of them. Veit is an author of a relatively large work spanning almost
all genres (except for opera – although he thought about it as well, but in the end he did not carry out his
plans). His vocal compositions are written mainly (and naturally) on German lyrics, but Veit's national
patriotism also made him publish a large number of songs and male choirs on Czech lyrics (Chmelenský,
Vacek Kamenický, Šmilovský, folk lyrics).
In his time, he established himself mainly through chamber music (string quartets, string quintets,
compositions for solo piano, etc.). His orchestral works, although scarce, also achieved international
recognition in his time – this is especially true for his only Symphony in E minor op. 49, premiered with
a positive response at the Leipzig Gewandhaus in October 20, 1859 and in September 29, 1859 in Prague
(under the baton of František Škroup). Until Dvořák’s symphonies Czech music is relatively poor in this
respect, and Veit's symphony is definitely an important deed in this field. Therefore, it is naturally part of
this recording dedicated to Veit's orchestral work.