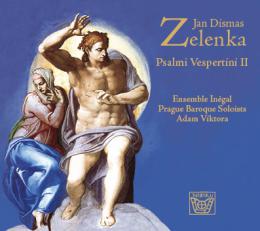 Between mid 1725 and late 1728 the Bohemian-born, Dresden-based court musician Jan Dismas Zelenka (1679–1745) composed three cycles of thirty-three psalms and Magnificat compositions for Vespers. Each cycle begins with a setting of the psalm Dixit Dominus and it then develops to serve one or more sequences of psalms to serve almost every Vespers service of the liturgical year.

Between mid 1725 and late 1728 the Bohemian-born, Dresden-based court musician Jan Dismas Zelenka (1679–1745) composed three cycles of thirty-three psalms and Magnificat compositions for Vespers. Each cycle begins with a setting of the psalm Dixit Dominus and it then develops to serve one or more sequences of psalms to serve almost every Vespers service of the liturgical year. (Psalms for Saturday Vespers before the four Sundays of Advent, Saturday Vespers before Septuagesima, and Vespers of Wednesday of Holy Week, were not set by Zelenka.) In 1726 Zelenka began to enter these psalm settings into the Inventarium rerum Musicarum Ecclesiae servientium, his personal inventory of sacred music that began to be kept on 17 January of that year. His entries demonstrate that the thirty-three Vespers works were conceived in three cycles. They were composed over a period of three years for the Catholic court church of Dresden, a royal chapel dedicated to the Most Holy Trinity. The unavoidable assumption is that this was a well-considered, deliberate plan. Interestingly, the beginning of these Vespers psalm compositions almost coincides with Zelenka’s return from a pilgrimage to the shrine of the Virgin of Sorrows at Graupen (Krupka) in Northern Bohemia on 12 September 1725. The pilgrimage, which was supported by the Dresden court, began in Graupen with an open air procession to the Marian shrine on 11 September during which Zelenka’s Litanies of the Blessed Virgin (Litaniae de Beatissima Virgine, ZWV 150) were sung by eleven young musicians (the Kapellknaben) from Dresden’s Catholic court church, a royal chapel served by Jesuits from the Province of Bohemia.

Following this project of 1725–1728, Zelenka composed an additional eight additional Vespers psalms. These were listed in the Inventarium separately under the title ‘Psalmi varii. | J. D. Z. Separatim | Scripti.’ Thus, it does seem from mid-1725 Zelenka became partly responsible for the musical Vespers services held in Dresden’s Catholic court church, which explains his acquisition over the following years of more than eighty psalm compositions, mainly by Italian and Bohemian composers which also were entered into his inventory under the title ‘Psalmi Varioru[m] Authorum.’

Zelenka listed his collection of thirty-three psalm settings into his Inventarium under the heading of psalms for the whole year: ‘Psalmi Vespertini |totius anni. | Joannes Disma: Zelenka. | quae habentur in libros.’ Surprisingly, the listings did not begin with the earliest settings of 1725 (which have been recorded as Jan Dismas Zelenka: Psalmi Vespertini I. Ensemble Inégal, Prague Baroque Soloists cond. Adam Viktora, Nibiru, 2015), but with the settings heard here – the second Vespers cycle that Zelenka began to compose in 1726.

This cycle consists of eleven compositions (three settings now are missing) and it would have served the usual cycle of five psalms for Vespers of a Confessor (Vesperae de Confessore): Dixit Dominus (ps. 109); Confiteor tibi, Domine (ps. 110); Beatus vir (ps. 111); Laudate pueri (ps. 112); Laudate Dominum (ps. 116); and the canticle Magnificat. According to the dates Zelenka wrote into the scores, two of the first four listings of this Vesperae de Confessore were composed in March 1726:

Zelenka then listed a group of settings composed between 1726 and 1727. These are the psalms Laetatussum (ps. 121), Nisi Dominus (ps. 126), and Lauda Jerusalem (ps. 147), the Magnificat, and Laudate Dominum (ps. 116.) When the Dixit Dominus and Laudate pueri settings are taken with Laetatus sum, Nisi Dominus, Lauda Jerusalem, and the Magnificat, a complete Vespers for the Blessed Virgin (Vesperae BVM) results. The sequence Vesperae BVM is required for all Marian feasts, feasts of female saints, Circumcision of Our Lord (1 January), and St Gabriel Archangel (24 March), as well as Vespers II for feasts of Apostles and Evangelists and Corpus Christi:

This cycle concludes with settings of Credidi (ps. 115) the fifth psalm for Vespers I and II for the feasts of the Most Holy Name of Jesus, and the third psalm for Vespers I and II for the octave of Corpus Christi. It also was the third psalm required for Vespers I for feasts of Apostles and Evangelists, and the fifth psalm for Vespers II for Martyrs. This sole setting of Credidi by Zelenka was composed either late in 1727 or early 1728, and over the years it must have been heard frequently in Dresden’s Catholic court church. It would seem that Zelenka’s omission from the cycle of the De profundis setting (ZWV 96), was an oversight only to be rectified when he entered the work into the Inventarium (as number 18) at a later time. Peculiarities of  Zelenka’s musical notationdefinitely place this De profundis as coming from late in 1727 when it would have been heard during the Christmas octave – the only time when De profundis is required for Vespers (other than Requiem Vespers):

While the Vespers works composed between 1726 and circa 1727 or early 1728 tend to be less weighty in length and musical content than those of the earlier cycle of 1725, they nevertheless demonstrate Zelenka’s high concern with tight musical structure and text delineation. Most settings  conclude with a fugue. The opening work, Dixit Dominus (ZWV 68), is composed in three movements.

The earliest dated work of the cycle, Beatus vir (ZWV 76), also is composed over three movements, the first of which carries the entire psalm text which frequently is ‘telescoped’ – that is, one or more verses are distributed throughout the vocal parts to be sung at the same time, while verse 9 is set as a dramatic Szene. The doxology text ‘Gloria Patri’ is a particularly beautiful arioso for solo soprano accompanied by violins and continuo playing a unison ostinato-like pattern.

The through-composed Laetatus sum (ZWV 88) opens with a figure used by Zelenka as the first fugal subject of the ‘Amen’ movement Dixit Dominus (ZWV 68, above), an indication that when conceived, these two works were thematically linked. This figure first appears at the opening of the ritornello where it is immediately treated canonically. Although this composition is set for soprano and alto vocal soloists, it is the    alto who carries the main solo vocal burden.

Nisi Dominus (ZWV 92) is a wonderfully compact through-composed setting of 202 bars. The choral and solo vocal passages sit above a relentless instrumental unison ostinato pattern of eight bars length which provides driving energy from beginning to end. The ostinato pattern moves through    a series of predominantly minor keys: A minor – D minor – E minor – B minor – G Major – B minor – A minor. The one excursion into a major tonality occurs at exactly the half-way mark at bar 101, the ninth statement of the ostinato. With great art and skill Zelenka contrived to move through this harmonic cycle without ever weakening the momentum established by the ostinato pattern.

With the setting Lauda Jerusalem (ZWV 104) Zelenka combines three devices to give powerful thematic and structural cohesion: refrains; an ostinato pattern; recapitulation. Throughout this work an accompanying three-note triadic figure provides a rhythmic ostinato. The opening choral statement also appears throughout as a refrain which, with later repetitions, becomes more fragmented. The beginning of the uppermost part of this refrain then returns as the principal fugal subject for the text ‘Sicut erat in principio’ (‘As it was in the beginning’), thereby providing a great structural arch. In the course of the final double fugue the little ostinato returns as the secondary subject on the word ‘Amen.’ Thus, Zelenka achieved the highest degree of musical integration in this small through-composed work. The dedication provided by Zelenka at the conclusion of the setting, ‘A M D G VV M OO SS AA P i R:’, is a rare formula in which the plural ‘Virgins’ (VV) is used.

Of immediate interest in the Magnificat of c1727 (ZWV 107) is the use of Gregorian chant as the principal theme of a refrain which appears five times throughout the first movement above a walking bass line. This refrain consists of an eight-bar block of double counterpoint, the primary theme of which is based upon the Gregorian psalm chant Magnificat on the third tone, sung by the choral sopranos. Below this a second theme (which bears close relationship to the psalm chant Magnificat on the fifth psalm tone, transposed up a fifth) is sung by the choral altos. This double counterpoint is imitated by the choral tenors and basses. Two copies of this Magnificat setting now are held in Berlin (D-B: Amalienbibliothek, and another made by Zelenka’s former student and Bach’s Leipzig successor, Johann Gottlob Harrer) and London (Royal College of Music.)

Credidi (ZWV 85) presents yet another example of tight thematic construction through the use of two themes, while De profundis (ZWV 96) is composed over three distinct movements. The writing for the tenor and bass soloists in De profundis suggest that fine male singers were available to Zelenka at the time of composition.

The University of Melbourne