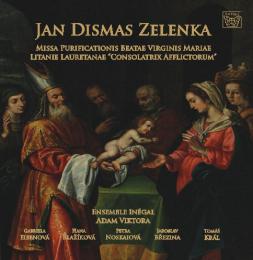 The CD of Zelenka´s Missa purificationis or „Our Lady´s Purification“ Mass comes out in a world premiere in a breath-taking ...

The CD of Zelenka´s Missa purificationis or „Our Lady´s Purification“ Mass comes out in a world premiere in a breath-taking rendition by Adam Viktora and Ensemble Inégal. How many brilliant peak-Baroque works are waiting yet for a sensitive hand able to rid them of the layer of dust and reintroduce them to the ears of fervent listeners, for the ears of musicologists, for the uplifting of all of us? The recording was made using authentic period instruments at the Church of Our Lady under Chains in Prague. The mass is followed by Litaniae lauretanae „Consolatrix afflictorum“.

Both compositions in this CD are associated with the name of the Princess Elector of Saxony and Queen of Poland Maria Josepha, daughter of the Austrian Emperor Joseph I. Her marriage to the successor to the throne was part and parcel of the plans of Augustus the Strong to have the Saxonian-Polish union politically safeguarded, a goal desirable enough for the Crown Prince to convert to Catholicism much as his father had done to win the Polish crown. Ever since she came to Dresden in 1719, Maria Josepha, a woman raised in rigorous Catholicism, had been taking an active part in her Church´s affairs, including the organization of divine services modeled on her native court of Vienna. It was exactly then that the rise and famous era of the Dresden Court church music began.

The principal agents of this development included Czech composer Jan Dismas Zelenka (1679-1745). Employed as a double-bass player with the Court orchestra, Zelenka soon drew attention to his exceptional power of composition. During the 1720s, he would start taking upon himself increasingly more work as a stand-in for the chronically sick conductor Johann David Heinichen. After the latter´s death, Zelenka became his de facto successor, and continued to act as a conductor even after the Court appointed to the position Johann Adolf Hasse, a star composer just risen and adorned with his operatic achievements in Naples. A break occurred in 1733, when Augustus the Strong, Elector of Saxony and King of Poland died to be succeeded by his son with his wife, the previously mentioned Maria Josepha. Musical services at the Court of Dresden would be in for a number of major changes designed to comply with the ideas of the new sovereign. This was when Zelenka tried to win the position of conductor; however, his application found no response, and the office of conductor was taken up by Hasse.

Studying a number of Zelenka´s works dedicated to Maria Josepha, Moritz Fürstenau, a music historian of Dresden, was led to suspect, as early as the middle of the 19th century, that the wording of those dedications might be hiding more than the then usual devout humbleness. Perhaps a measure of affinity shown by profoundly religious Catholics in a Protestant country? We do not know. Zelenka´s confidence in the Princess seems to emanate from the subsequently discovered unusual draft of the composer´s desperate supplication for a financial emolument when he landed in need after paying from his own modest means to prepare the compositions for presentation in place of the missing chief conductor.

Missa purificationis Beatae Virginis Mariae, or „Our Lady´s Purification“ Mass was composed in August 1733 in an incredibly short period of a mere ten days. Its dedication is obvious from the composer´s remarks in the score: it was composed „on the occasion of, by the grace of God, our noblest Princess Elector´s happily accomplished delivery ...“ Hence, the mass was not primarily intended for the day of Virgin Mary´s Purification (February 2nd) but to mark the Queen´s first visit to the church after giving birth to a son. To go by the laconic record in the diary of the Dresden Jesuit mission, this happened on Sunday, August 23rd, when Zelenka´s mass appears to have had its first performance. It is a solemn mass with grand instrumentation comprising an ensemble of four trumpets and kettledrums, oboes and flutes. In accordance with period usage, the mass was conceived as a Proper parts or cantata mass, meaning that each section of the text was musicalized as an independent part. Moreover, the ideal of a „mixed church style“ resulted in the alternation of a variety of modes of musicalization from concertant choirs, to choir fugues, counterpoint movements in the stile antico right up to arias or ensembles.

Compared with Zelenka´s subsequent church compositions, this is a relatively short composition, which - apart from purely practical liturgical reasons - may also be put down to the haste marking its genesis. It is obviously in this sense that the Kyrie eleison da Capo repetition should be understood. Unusual sparingness also marks the Credo conceived here as a single well composed movement with certain parts of the text (such as „et incarnatus“, „crucifixus“ or „mortuorum“) highlighted by tempo or texture changes. Similarly, the absence of trumpets in the instrumentation suggests that some earlier composition may have been inserted in place of the Credo. In no case, however, did Zelenka allow haste to impair his characteristic musical diction abounding with astonishing harmony, refined counterpoint, stark contrasts and breath-taking ritornelli. As a rule, period composers would use similar means to treat a number of places in the text of the Proper of the Mass set to music countless times before - Zelenka, too, resorted to tradition in setting to music, for instance, the part Christe eleison as a duet of two sopranos. In contrast, what comes as unusual is the literal use of the fugue Cum Sancto Spiritu from the end of Gloria as Osanna closing the Sanctus part. The whole mass comes to an end with a double fugue (Dona nobis pacem), with its first theme referring to Kyrie and thus accentuating the conciseness of the whole work.

Litaniae lauretanae „Consolatrix afflictorum“ together with other litanies of Lorretto called „Salus infirmorum“ and four liturgical compositions belong in the group of Zelenka´s last great works. The composer dedicated two of his litanies to Maria Josepha in the year 1744. Period references to voice specification suggest that - unlike his last masses, these litanies were also actually performed, one by one, as a prayer for and then as an expression of thanks for the Queen´s recovery. The title „Consolatrix afflictorum“ is one of the many titles for Virgin Mary used in the litanies meaning „Comfort of the afflicted“. The name of the other litanies then means „Health of the Sick“. However, as early as 1714, i.e., prior to their dedication to the Queen, Zelenka had sent these other litanies to Prague to his first aristocratic patron Count Johann Hubert Hartig, who died in the same year. Could it be that Zelenka had originally composed both works for Hartig?

The litanies of Lorretto „Consolatrix afflictorum“ are written for a sparingly manned orchestra with strings and two oboes, which is typical of Zelenka´s late works. The composition consists of five parts where the final Agnus Dei makes use of the same music as the introductory Kyrie. The third movement Sancta Maria is the central part of crucial significance: the soprano keeps repeating a paraphrase of the choral incantation Sancta Maria, ora pro nobis Holy Mary, pray for us) - we hear it sung in unison by the whole ensemble also at the beginning and at the end of the movement - while in other voices, sung in quick succession, come the particular titles for Virgin Mary. Then a sudden Adagio in the middle of the movement presents the „title“ verses: „Salus infirmorum, Consolatrix afflictorum, Auxilium Christianorum, ora pro nobis“ (Health of the sick, Refuge of sinners, Comfort of the afflicted, Help of Christians, pray for us). As in the other late works by Jan Dismas Zelenka, what we also find facinating in these litanies is that we listen not to an old man looking back in a summarizing work but to someone whose style shows a way forward. Or perhaps upward to star-studded heaven.