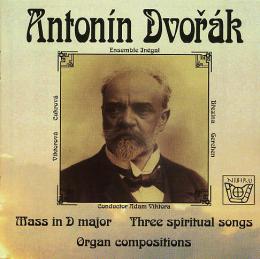 Dvorák´s Mass in D-major, better known in its instru-mentation for orchestra, is presented in this recording in its original version ...

Dvorák´s Mass in D-major, better known in its instru-mentation for orchestra, is presented in this recording in its original version featuring a small mixed choir and romantic organ and, what is more, played in the Lužany chateaux chapel, for which it was composed and where it was also performed for the first time. The listener´s experience is enhanced by the period-inspired presentation as developed by conductor and organist Adam Viktora, as well as by the natural vocal performance of all members of the Ensemble Inégal. In addition, the CD carries spiritual songs and organ compositions.

Antonín Dvořák (1841 - 1904) and architect Josef Hlávka (1831 - 1908), a great patron of sciences and art, enjoyed a long, deep and all-round relationship. Hlávka's patronage in the field of music was very much under the influence of his wife Zdeňka (1843 - 1902), a woman of versatile talent and interests. An outstanding singer (a graduate of Pivoda's school for singers), she was an equally accomplished pianist. In their home, the Hlavkas held regular Friday parties of music which developed into a venue of the Czech society's artistic and intellectual élite where a great deal of music could be heard - including Dvořák's compositions. Mrs. Hlávková was extremely fond of Dvořák's music (though only two years his junior, she was also one of his students); she would buy practically all of his music published or arranged for the piano. Together with Dvořák, she would often play works for four hands including new compositions not yet peformed in public, and Dvořák would always set great store by her opinion. It was Mrs. Hlávková who asked Dvořák to write wa mass to mark the consecration of a new chapel at the chateau of Lužany near Přeštice (Josef Hlávka's birthplace - the Hlavkas' country house). Glad to oblige, Dvořák created a work far surpassing the level of mere incidental music.

Mass in D major (originally numbered as opus 76, definitively as opus 86) is a well concentrated, perfectly structured composition rich in expression, aimed right from the beginning far beyond a local occasion. As for the originál cast, Dvořák tailored it to the conditions of the Lužany chapel: only four sólo voices, a mixed choir and organ. He spent about four weeks working on the composition from May 26 to June 17, 1887. The Mass was first performed on September 11 of the samé year at Lužany with Dvořák conducting. The quartet of sólo singers (though the sólo parts are conceived so as to be manageable by members of the choir) was made up of Mrs. Hlávková herself (soprano), Dvořák's wife Anna (alto), R. Huml (tenor) and O. Schwend (bass), both resident in Plzeň, together with the Hlahol choir of Plzeň, and Josef Klička, a teacher of the Prague organists' school, playing the organ. For a later performance of the work in Plzeň, Dvořák reinstrumented the Mass for two harmoniums, cello and two double-basses. The work was given its finál shape in the year 1892 when, in response to a request from the Novello publishers of London, Dvořák arranged his Mass in D major for a symphony orchestra. This finál version of the work is dedicated to „Mr. Josef Hlávka, President of the Czech Academy of Sciences and Arts in Prague". In terms of form, the Mass in D major is based on the classical scheme of a six-part Catholic Ordinary, in which the most relevant music is situated in the Credo and Agnus Dei parts, which makes profound sense in terms of structure as well as content.

Our recording offers the originál version of the work with organ, and its exceptional value rests in that it was made in the authentic setting of the Lužany chapel.

Three Spirituál Songs, op. 19b are incidental compositions par excellence written one by one in the years 1877, 1878 and 1879 during Dvořák's summer vacation visits to friend Alois Gobi at the chateau of Sychrov near Turnov, northern Bohemia. Like his Mass in D major, these bagatelles based on spirituál texts were composed for the Sychrov chateau chapel and intended for a female voice and organ. This series comprises a fourth composition - O Sanctissima - for two voices -alto and baritone with orgánů, bzut this has naturally not nbeen included in this particular compact disk. All the three sólo songs are dedicated to Dvořák's wife Anna , an accomplished alto. The earliest of the three - Ave Maria - was written in July 1877, and Mrs. Dvořáková with Antonín Dvořák playing the organ performed it for the first time in the chapel of Sychrov chateau on St. Anne's day July 26, 1877. The second wowrk - Hymnus ad Laudes in Festo Sanctissimae Trinitatis - was created a year later. and its premiére on the Virgin's Assumption dav of August 15. 1878 was arranged by Alois Gobi himselť, quite a good baritone in his own right. with the compo-ser again playing the organ. The next year saw the creation of the other two compositions - Ave, maris Stella - and the aiready mentioned O Sunctissima. The composers wifc sang the first of Ihe two on September 4. 1879 and the second. together with Alois Gobi. four days later to mark Dvořáka 38th birthday.

This compact disk is complemented with Dvořák's study compositions for organ written in 1859 during his second year of studies at the organists' school. A total of eight compositions háve bcen preserved - five Preludes (in D major No.l. G major. A minor, B-flat major and D major No.2) and three fugucs (in D major No. 1. D major No.2 - initially mistakenly designated as Fughetle and G minor). While. of course. composed by a beginner. they do nevertheless show Dvořáks power of counterpoint and skill in handling the basic teehnical intricacics of a polyphonic textuře which enabled him to give the two reather shon organ movements (not at first intended as one whole of the type of Bach's Preludes and Fugues!) an lucid and logical structure. Přelude in D major No.2 and Fugue in G minor was played by Dvořák for his finál (..school-leaving") examina-tion at the organists" school on July 30. 1859.

Mendelssohn regarded liturgie music composing as a great and difficult ehallenge to a symphony-oriented composer. As from his times. artistic and applied music would follow two predomi-nantly difťerent courses. For lhal reason alone. Dvořák's Mass in D major can be viewed as a miracle for the way it goes about bridging the gap. Wilhoul seeming old-fashioned. Dvořák displays a sovereign command of the forces of harmony, melody and counterpoint in a work for four voices. The interconnection of the voices abounds in depth of expression and a wealth of interrelationships. At the samé time. we are made awarc of an aceomplished mastery of the traditions of voice conduGtion reaching far back to the pre-Bach period combined. in an časy and unobtrusive way. with the broadened scopc of expression characteristic of the 19th century.

There are so many composilional gems commanding admiration. for instance, in the touch of the opening part of Kyrie. Our first impression is one of transparent, tranquil mood in the underlying key of D major. However, after only a few bars, Dvořák introduces the B minor key in the pedál, thus inducing a more solemn mood; from that moment on, the music is carried by a crescendo, in which an atmosphere of carefree enjoyment altemates with spells of profound eamestness. The compositionally simple treatment of „et incarnatus est" is remarkable, too. Its melody is taken over from the opening bars of Credo. The descending tetrachord b-flat-a-g-f grows into b-flat-a-g-f-sharp, thus invoking in our minds the idea of immaculate conception from the Holý Spirit „for our salvation". „Et homo factus est" is treated as an inversion of this melodie line; both start from the tone b-flat, the basic tone of the Credo, the divine and the human world are presented as rectus and invertus; with the sensitive tone f-sharp having its counterpart in the „e-flat" exclamation.

The Sanctus part is rendered in a masterly way as „Three times Holý" with the sound building up in metric units of one, two and three bars - followed by gradual triple diminuendo. With its introverted action, the Sanctus part is a symmetrical contrast to the lucid brightness of Gloria. Its fortissimo exclamation by the choir accompanied by powerful chords in the organ part correspond to the delicate consonance of voices in the Sanctus part and to the still finer echo of the organ. Thanks to these means of expression, the whole of Dvořák's Mass is endowed with a balanced architecture where the Credo is the dominant point surrounded by the Gloria and Sanctus, Kyrie and Agnus Dei parts.

Adam Viktor's interpretation is like a bridge visualizing the rhetoric tradition of the Baroque period with an inner light emanating from declamation and articulation without suppressing Dvořáka romantic disposition. Involuntarily, we feel the proximity of flood-lit Baroque churches in Bohemia, their filigree lightness and dynamic charge of their proportions.

A bridge like that can be created with a sparing use means of expression. Similarly as for the premiére, the present recording made use of 12 singers and seven stops of the small organ in the Lužany chateau chapel. Knowledge of these means and concentration on that which is essential rather than opulence are characteristic features of a true master.

Ensemble Inégal was founded in the year 2000 by organist and conductor Adam Viktora in conjunction with soprano Gabriela Viktorova (Eibenová). Made up of professional singers and instrumentalists of the young generation, the ensemble studies both period interpretation of 16th -18th century compositions and romantic and modern music. Out of the series of concerts given during the first season of its existence, undoubtedly the most interesting project was this yeaťs co-operation in Prague with the British conductor Andrew Parrott. This compact disc with Dvořáka Mass in D major (The Lužany Mass) is the first recording to háve been made in the authentic setting of the Lužany chateau chapel and, at the samé time, Ensemble Inégal's very first recording.

Organist and conductor Adam Viktora is a graduate of the Conservatoire of Plzeň and the Academy of Performing Arts in Prague. He also attended senior organists courses with F.L.Tagliavini, C.Bossert, H.O.Erikssohn and others. Much of his interest is focused on historical organs and on efforts aimed at salvaging such instruments. He has been publishing on the subject in musicological literatuře and taking an active part in the international project Organ as a European Cultural Value, while, at the samé time, working as a teacher at the Plzeň Conservatoire. He has made a number of recordings for the rádio and television.

Soprano Gabriela Viktorova is a member of the up and coming generation of singers. She graduated from the Prague Conservatoire in 1993 to continue as a private student of Prof. Libuše Tomíškova's. In the years 1998/99, she attended a course given by Prof. Julie Kennard at London's Royal Academy of Music. Her sólo appearances at music festivals in thiscountry and abroad (Prague Spring, Musica Antiqua Bruges, Europalia Brussels, etc.) were received with praise. She takés a keen interest in ancient music interpretation, and has a record of co-operation with renowned personalities in the field, e.g., S.Standage, S.Stubbs, A.Parrot, E.Tubb, I.Partridtge, E.L.Banzo and others.

Tenor Jaroslav Březina graduated from Prague Conservatoire as a student of Zdeněk Jankovský's. The winner of a number of intemational singers' contests, he is noted for purity of style; he is frequently invited to také part in Baroque and classical repertoire events. As a soloist of the Capella Regia Musicalis he has earned critical acclaim at home and abroad for his tenor parts in oratorios by Hándel, Zelenka and Graun. At present, he is a soloist of the Prague National Threatre opera company.