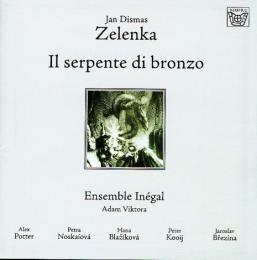 The CD of Jan Dismas Zelenka´s Il serpente di bronzo is sure to become a tidbit for all those in ...

Among the Czech composers of the first half of the 18th century, Jan Dismas Zelenka stands out as a personality of truly European dimensions - as regards both his significance and his fortunes. As to his stature he occupies a place next to Bach, Handel or Vivaldi, as to his roots he is anchored in his native Bohemia, as to his career and the most productive period, however, he belongs to Saxonia.

It was as if his career as a composer was only beginning when as a mature man who had just turned thirty he left Prague to serve with the royal court band in Dresden where he then spent the rest of his life. There is evidence of only two works he had composed before he left Prague, though he must have written more there. But he would hardly have reached such a level of accomplishment as a composer without the stimuli offered to him by the eventful musical life in Dresden and by his studies with Johann Joseph Fux in Vienna, studies financed by his new superior. True, in the end Zelenka failed to reach a position corresponding to his undeniable talent. His works, though, were appreciated by all the authorities who came to know him, including Johann Sebastian Bach. Zelenka never lost touch with the Prague scene and so his compositions were familiar in his home country, too. While in Dresden, soon after his death, Zelenka´s work became relatively soon well nigh forgotten, in the Bohemian church choirs his compositions could be heard perhaps till the end of the 18th century.

Jan Dismas Zelenka´s gradual emergence from oblivion can be traced back to the 1830s. On the German side, this slow comeback is associated with the names of music historians and publicists Friedrich Rochlitz and Moritz Fürstenau, in the Czech Lands, the first to write about Zelenka, clearly inspired by Rochlitz, was 19th century historian František Palacký. Later on, Bedřich Smetana himself set out on a journey to Dresden in search of Zelenka´s compositions, and thanks to the material brought back from this journey, Prague was able to hear Zelenka´ s Overture in F major in the year 1863. Yet it took another one hundred years for the true greatness and significance of Zelenka´s work to re-emerge. Thanks to musicologist Camillo Schoenbaum, the composer´s instrumental works were then published in print. Subsequently, Zelenka´s trio sonatas found in Swiss oboist Heinz Holliger an interpreter, whose outstanding recordings helped the half-forgotten composer embark on the road to celebrity. The wave of interest raised in the early 1970s then brought forth a number of research, publishing and recording projects undertaken by musicians and musicologists all over the world. Looking back at those works dedicated to Zelenka´s magnificent heritage, one cannot help feeling that Zelenka´s own fellow-countrymen still owe quite a few things to their master. Let the present recording, appearing 270 years after the composer´s death, be just an installment in repaying the debt.

Composed in 1730, the Cantata sacra Il serpente di bronzo was first performed on Good Friday of the same year in Dresden. The work fits in with the context of Catholic sacred music as performed at the Saxonian-Polish court where it went through its first period of efflorescence starting in the 1720s. The Saxonian Prince Elector Frederick Augustus I - better known as Augustus the Strong - had converted to Catholicism in 1697 in his effort to seek election to the Polish throne. The first Roman-Catholic court church came into being as a reconstruction of an old opera playhouse on a hill called Taschenberg. Consecrated on April 5, 1708, it housed Catholic religious services until a new royal court church was consecrated in 1751. Music there was provided by the local ensemble of boys originating from Bohemia because the court band, refounded in 1709, first consisted of instrumentalists only. Conditions for church music improved after the Saxonian Crown Prince Frederick Augustus had married Archduchess Maria Josepha, daughter of the deceased Emperor Joseph I of Austria, as the new Princess was keen on organizing religious services after the model of her home imperial court of Vienna. Starting in 1721, the court band, conducted by bandmaster Johann Heinrich Heinichen (1683-1729), took regular part in the court religious services. In addition, those who presented their own works in the church included „Italian music composer“ Giovanni Alberto Ristori (1692-1753) and double-bassist Jan Dismas Zelenka (1679-1745). As from 1724, the liturgical year culminated, among other events, in presenting Italian oratoria on Good Friday evenings and Easter Sunday afternoons. This started a tradition which persisted in the Catholic court church in Dresden until 1825, i.e., longer than anywhere else north of the Alps. Rather than being a narrative of the Lord´s sufferings which already had its place in the liturgic readings during the principal services, those oratoria were based on stories from the Old and New Testaments presented in typological conjunction with the passion and death of Jesus Christ.

Jan Dismas Zelenka was born on October 15 or 16, 1679 in an organist´s family in the Bohemian village of Louňovice where he acquired basic education in music apparently from his father. In all probability he then became a student at the Clementinum College in Prague, later to serve as a musician in the country´s metropolis. In the year 1710, he acquired a position with the Dresden court band as a double-bass player. Two years hence, he presented to the king the music score of his St. Cecily Mass and solicited his permission to spend a vacation in Italy and France. Finally, in 1716, he left for Vienna where, until 1719, he studied under the guidance of senior imperial-court bandmaster Johann Joseph Fux (1660-1741). On his return he resumed his position as double-bassist to devote himself to composing music in what could be called „moonlighting“. His works, such as his famous six trio sonatas, his music to Easter week nocturnal masses composed in Dresden in 1722 as much as his Melodrama di Santo Wenceslao composed in 1723 on the occasion of Charles VI´s coronation as Czech king - all that drew attention to his extraordinary talent. As from 1725, Zelenka was increasingly often in charge of the court band´s church services as a substitute for the ailing bandmaster Heinichen, and for Ristori because of the latter´s activities elsewhere. However, the division of assignments must have been governed by strict hierarchisation, because it was not until 1730 that Zelenka was given a chance to rouse attention with his Good Friday oratorio Il serpente di bronzo, but not before Heinichen and Ristori had composed their own works for that purpose. After Heinichen´s death, Zelenka de facto took over as bandmaster, but his formal application to be given the post de jure failed as, meanwhile, the court had approached Johann Adolf Hasse (1699-1783), a freshly renowned musician. In 1736, Zelenka was promoted to the post of „church composer“. Until his death on December 23, 1745, he would take turns with Hasse and Ristori in conducting the royal court band´s church activities and wrote his magnificent late compositions: five masses, two Lauretan litanies, and Miserere. Zelenka had composed music designed for performance at Holy Sepulchre effigies already before. His three sepolcri (Holy Sepulchre cantatas) commissioned by the Clementinum College in 1709, 1712 and 1716 on simple Latin textual compilations were rather modest works. In contrast, the libretto to Il serpente di bronzo with its dramatic rendering of biblical narratives (numbers 21, 4-9) is a work steeped in the tradition of Italian oratoria. While the source story only refers to an exchange between God, Moses and Izraelites, the Dresden court poet Stefano Benedetto Pallavicini (1672-1742) added three more characters (Azariah, Egla and Namuel) to make a succinct tale. Following the introductory chorus with the people cursing their tribulations in the wilderness on the way to the Promised Land, Azariah and Egla long for a return to Egypt and complain of their miserable lot. Provoked into wrath by their blasphemies, God floods their camp with thousands of snakes. Faced with imminent death, the people step up their lamentation and penitence to a point where Moses starts praying for the Lord´s forgiveness. In response, God invites Moses to cast a serpent of bronze and lift it up for everybody to see. Whoever is bitten and takes a look at this effigy shall be saved. After a „change of scene“, Egla mourns at the fate of her dying baby son until Azariah comes with the good news of possible salvation. Before the work can come to an end, Moses points to the cross of Christ, of which the lifting up of the serpent is an archetype (John 3, 14) and which helps save all mankind. Unusual in an Italian oratorio but almost inevitable in the dramatisation of this story are the two appearances of God as a talking person. Similarly, the whole concept of this work - with no overture but with double choruses at the opening and in conclusion - differs from the customary norms of this musical form. It is hard to judge today to what extent Zelenka influenced the libretto. However, it is mainly in the dirge-like arias that the text offered him unusual opportunities for developing his urgent way of musical expression. The work clearly comes to its climax with Moses´s prayer in the aria Uno, vero, eterno e santo, the very first part of the oratorio making full use of the complete set of instruments.

In the autograph of the score we can read the names of the singers who, however, did not attend the premiere of Il serpente del bronzo in Dresden in 1730. That accounts for the need to hold at least two repeat performances in the next few years, though we know next to nothing about their precise dates. In 1734, Johann Adolf Hasse took up his position of bandmaster at the court of Dresden and had his own works, including Easter week oratoria, performed from then on as much as before. It was only in his absence that Zelenka was given two more opportunities to present his own new works: Gesú al Calvario (1735) and I penitenti al sepolcro del Redentore (1736). While Hasse´s oratoria won acclaim throughout Europe in the 18th century, Zelenka´s opuses were soon relegated to the archives. It was not until recently that they were brought to our due attention.