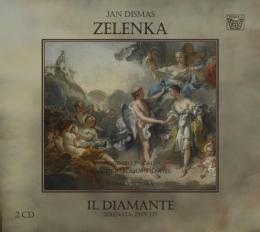 Il Diamante is the only known contribution Zelenka made to the genre of serenata. A typical feature of the serenata ...

Il Diamante is the only known contribution Zelenka made to the genre of serenata. A typical feature of the serenata in the first half of the 18th century was its occasional, usually congratulatory purpose. Serenatas were mostly vocal-instrumental compositions written to Italian texts, situated somewhere between the cantata and the opera. They were very popular with the royal and noble courts of Europe, usually accompanying celebrations or other important events in the lives of monarchs and nobility.

If we speak about the late works of Jan Dismas Zelenka, we usually refer to his fascinating last masses, oratorios or litanies, which have today finally gained the attention and acclaim they so fully deserve. With sacred music always being the focal point of Zelenka's work, the violone playing composer who was born in Bohemia was eventually appointed Kirchen Compositeur in 1735 after having spent over twenty years as “the most humble and loyal servant” at the royal court in Dresden. Still, among his late works we also find the Serenata ZWV 177 from 1737, another major work, which, thanks to the newly discovered printed libretto, now has a title Il Diamante. It was one of the few secular vocal compositions, possibly also the last, Zelenka wrote for the Dresden court, and crowns his work as a music dramatist. This began with his earliest known composition, music to the school drama Via laureata (1704), which has unfortunately not survived. The same branch of composition also includes the melodrama Sub olea pacis written for the celebrations in Prague in 1723, a collection of Italian arias composed ten years later, and three Italian oratorios, the last two of which – Gesu al Calvario (1735) and I penitenti al Sepolcro del Redentore (1736) – preceded the composition of the serenata.

Il Diamante is the only known contribution Zelenka made to the genre of serenata. A typical feature of the serenata in the first half of the 18th century was its occasional, usually congratulatory purpose. Serenatas were mostly vocal-instrumental compositions written to Italian texts, situated somewhere between the cantata and the opera. They were very popular with the royal and noble courts of Europe, usually accompanying celebrations or other important events in the lives of monarchs and nobility. Dresden was no exception, and the genre started to thrive there especially after 1719, the year in which the crown prince Friedrich August II married the music loving Maria Josepha, archduchess of Austria. It seems to have been a manifestation of the cultural influence coming with the princess from her native Vienna, where regularly performed serenatas formed a componentt of the imperial style.

Throughout the 1720s Zelenka composed mainly sacred music for the Catholic church; he may not have had the opportunity to write any “Italian music”. The situation changed in the early 1730s, partly on account of the appointment of Johann Adolf Hasse to the post of Kapellmeister, partly owing to the aesthetic preferences of the young royal couple, who succeeded to the throne as King and Queen of Poland, and Elector and Electress of Saxony, after the death of Friedrich August I, or Augustus II the Strong, in 1733. When Zelenka composed the eight Italian arias later that year he might have wanted to demonstrate to the sovereign that he was also able to write in the theatrical style. It has to be admitted that the surviving arias – even though they are musical masterpieces – reflect a certain negligence of the standard principles of the theatrical style, which may have been difficult or, more likely, unimportant for a composer who had devoted his life to church music. Yet in spite of this, these unorthodox arias represent a good example of Zelenka's unique style.

In December 1736 it was announced that the wedding of Prince Georg Ignatius Lubomirski to Baroness Joanna Stein would take place in Dresden in February 1737. This was no ordinary occasion; Lubomirski and his brother came from a noble family in Poland and held important offices at the Dresden court, while the bride was the sister in-law of the Saxon Prime Minister, Count Alexander Joseph Sulkowsky. All expenses were to be paid by the court, and as can be seen in the relevant documents all the necessary arrangements were made by the court officials, but curiously not for the performance of the serenata – which leads us to believe that it was planned as a surprise item to be played during the wedding dinner. This bears the hallmarks of Maria Josepha; she loved to spring surprises and sometimes went to extraordinary lengths to reach her aim.

Normally Hasse would have taken over this assignment but he had just returned from Venice and was busy at work on his opera Senocrita which was to be premiered only the day before the wedding. Their colleague Giovanni Alberto Ristori, who had composed a number of serenatas for the court, had provided the first opera of the 1737 carnival season and therefore it can be said it was Zelenka's turn. He must have welcomed the opportunity to write more Italian music, having honed his skills with the two oratorios, which had been well received by members of the court and church alike. It was also a one more chance to collaborate with court poet Stefano Benedetto Pallavicini (1672–1742), whose texts were much admired in Dresden.

Respecting the requirements of the genre, Pallavicini's libretto is written in allegorical and pastoral style, featuring a number of mythological characters. As the title suggests, the central theme revolves around a gemstone, alluding also to the bride's family name (Stein) and the real event, where Maria Josepha gave the bride a piece of jewellery with a precious stone. The work consists of an introductory three-piece sinfonia, eight arias and recitatives, and a final chorus, which is repeated twice. In accord with period conventions, sopranos predominate among the solo voices, taking four roles; the fifth role is assigned to an alto.

The plot opens with the character of Earth, who presents a gemstone to the goddess Juno. The goddess intends to use this gift as a sign and guarantee of marriage, which is to take place on the banks of the Elbe. She sends Hymen, the patron of marriage, to perform his task and hand over the jewel. He mentions the name of the bridegroom Georg Lubomirski, and an unspecified bride coming from a noble Swabian family, whose wedlock manifests a unity between a Slavonic nation and Germany. Then Cupid enters, announcing he has just brought the bridegroom from his native Poland (Sarmatia) to the banks of the Elbe, i.e. Saxony. In an aria with obbligato French horns, oboes and flutes, he likens the count to a lion that has fallen into the snares of love. Juno commands Hymen to hurry and give the jewel to the bridegroom so that he can adorn his beloved with it. The allusions to the beauty of the gem-bride and the unity of Poland and Germany come up again in the recitative of Hymen and Cupid, the latter celebrating the bride's beauty in a subsequent aria. The plot then nears the end with the appearance of Earth, again in recitativo accompagnato, who asks Juno as the patroness of brides and marriage to bless the newly-wed couple with fertility. A chorus follows, inviting everyone to revel in and celebrate the happy marriage.

It seems that the composition was to end at that point. However, the chorus is followed, quite surprisingly, by the appearance of an entirely new character, Venus, whose recitative with an aria represents a witty point and message, a “Licenza”, to the newly-wed: “Am I, perhaps, forgotten where love is being celebrated? Only I, illustrious couple, can make your happiness perfect…“ This final aria of Venus was most likely sung by Hasse's wife, the famous Faustina Bordoni, one of the greatest singers of the baroque era. Her participation seems to have been decided at the last minute, which would explain the addition of this last scene to the already finished composition. In any case, the final appearance of Venus and her beautiful aria, tender and passionate at the same time, creates a powerful and magical effect at the end.

Thanks to the recently discovered documents in the Hauptstaatsarchiv Dresden, we now know for certain that the serenata Il Diamante was performed as Tafelmusik during the wedding dinner on 28 February, and was praised as a “...superb Concert performed by Kapellmeisters Hass[e] and Ristori, during which the entire Royal Kapelle and the Italian Virtuosi could be heard.…“, in the Dresden court calendar report, without naming the composer. Zelenka took full advantage of the rich possibilities presented by the famous Dresden orchestra and its outstanding singers, for his music is brilliant and galant, and at the same time very demanding for the musicians. Here, it is the dynamic rhythmic diversity as well as the richness of the orchestral setting that mark Zelenka's highly original compositional style. Within these features the serenata crosses the boundaries of the genre, and this, as in his remarkable Trio Sonatas, is one of the reasons why his music is so fascinating for the modern day listener.

Zelenka writing a great secular work for Dresden court society late in his life; Zelenka's music being conducted by Hasse and sung by Faustina; Zelenka's music as a part of a politically important ceremonial occasion at court – none of this corresponds with the traditional image of Zelenka as an overshadowed composer held in low esteem by the court; nothing can be more far from the truth according to newly found sources, one of which has a contemporary of Zelenka describing him as the “perfect Virtuoso”, whose music gives a “foretaste of heavenly pleasure”.

With this in mind we can look forward to a new, revised way of looking at the greatest baroque composer from Bohemia. Furthermore, we can enjoy his incredible music – and rejoice over the new diamond discovered amongst Zelenka's works…