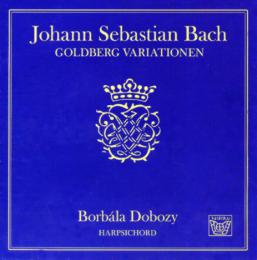 The entire work, the complete series of variations is manifested number, in which the individual movements never step outside the ...

The entire work, the complete series of variations is manifested number, in which the individual movements never step outside the Center, the One, for the power of the One is present in every movement. Thus, the bass that is the foundation of the work and the harmonic progression that is connected with it does not oppose the Many, but creates it. In order to make the One comprehensible and to relay his knowledge of it, Bach needed to elucidate the significance of the One in full.

In his compositions Johann Sebastian Bach aspired to the ideal of perfection rather than beauty. This can be seen clearly throughout his entire oeuvre. He saw beauty as the allure of perfection, as the dependence of the parts on an ideal mathematical relationship, on order and harmony.

The composition, Aria mit verschiedenen Veraenderungen vors Clavicimbal mit 2 Manualen (aria with different variations for a two-manual harpsichord), which appeared as the fourth volume of the Clavierübung, is nothing less than the Transfi guration of the One, the Revelation of the One.

The entire work, the complete series of variations is manifested number, in which the individual movements never step outside the Center, the One, for the power of the One is present in every movement. Thus, the bass that is the foundation of the work and the harmonic progression that is connected with it does not oppose the Many, but creates it. In order to make the One comprehensible and to relay his knowledge of it, Bach needed to elucidate the significance of the One in full.

That is what accounts for the 32 „Fundamental-Noten” (Bach’s own term) in the 32 measure of the opening Aria and the fact that the entire composition, with the repetition of the Aria, is made up of 32 independent movements. Like all of Bach’s series of keyboard suites, this too forms two great formal units, of which each one contains 15 variations. And because Bach’s personal Christian number interpretation is trinitarian, the 15 movements can be divided into units of fi ve times three variations, and at the end of each of the groups of three there is a threepart canon. The interval of the entries of the voices in the canons grows, until in the last one (the 27th), the only one that is two-part, it reaches the ninth.

A bass part joins the higher voices in the three-part canon variations, whose main (fundamental) notes are identical with the bass of the original theme. Every movement in the work as a whole is where it belongs according to its own value and for this reason it unfolds as it should, thereby demonstrating that everything is true in the Unity. But why do the groups of three close in an imitation form, in a canon? And to be sure, what exactly is imitation? We get an answer to this question with Bach’s series of variations. Imitation is the incarnation of an already conceived form in matter. As it says in Our Father: „…in heaven as on earth…” and that is exactly what we mean by „creation”.

In Bach’s work it is not the virtually inexhaustible variety of the variation series, not the forms themselves, but the meaning that shines through the forms, the light that comes from within that is so staggering. The realisation of the Unity does not create equality among the individua elements, but achieves the development of their properties and characteristics. That is how it attains that order in which everything is true, for everything is in its place, and proclaims that the Eternal is here with us, through which the One shines its light. The radiance of the One evokes in us the extravagant magnanimity of the Creator, the original text of being.

A word from the interpreter

The culmination of my studies in Prague with Professor Zuzana Růžičková, was my diploma concert, Aria mit verschiedenen Veränderungen by J. S. Bach, more familiarly known as the Goldberg Variations. This spell-binding composition is one of the greatest works in music literature for harpsichord, but we might as well say for keyboard as a whole. I have been a colleague and friend of Petr Šefl for a long time, and we’ve worked together on many fi ne projects. Therefore, I was very glad when he offered this great opportunity to record the work on the magnifi cent copy of a Mietke instrument, which he and his colleagues, Jan Bečička and Stanislav Hüttl, made.

Bach was personally acquainted with Michael Mietke, and knew the quality of his instruments so well that he bought one for the court in Cöthen in 1719. We were curious to know how Bach’s great work would sound on this Mietke-copy. We hope that the present recording will give the desired answer. I am very glad that this recording will appear through care of the Nibiru Firm in Prague, where I spent my memorable student days. I am very grateful to the instrument makers, especially Petr Šefl whose active participation helped make this recording possible. And I am particularly grateful to Mr. Tomáš Janeček of the Nibiru Firm.

Borbála DOBOZY was born in Budapest. She began her university harpsichord studies with Zuzana Růžičková in Bratislava then continued at the Prague Academy of Music (also with her) where she earned her diploma with distinction. In the following years she studied historic performance practice at the Salzburg Mozarteum – again graduating with distinction – with Liselotte Brändle, Nikolaje Harnoncourt and Johann Sonnleitner. Later she also studied with Sonnleitner for a year at the Zürich Academy of Music.

A major landmark in her career came in 1983 when she won a prize at the International Harpsichord Competition in Brugge, Belgium, to which she was invited back as a jury member in 2001. With her leadership the harpsichord faculty in Szeged department of the Liszt Ferenc Music Academy came into existence. She has held harpsichord courses on several occasions in Hungary, in Belorussia, and in Norway. She is a teacher at the annual early music course „Brillamment Baroque” in Thoiry (France).

She plays regularly at the world's leading festivals, and has performed at the Budapest Spring Festival, the Salzburg Festival, the Bergen Festival and the Concentus Moraviae. Although Borbála Dobozy's central focus in her activities as a musician is the music of Johann Sebastian Bach, her repertoire embraces the entire harpsichord literature, including works contemporary composers. Several Hungarian composers – György Arányi-Aschner, Árpád Balázs, Frigyes Hidas – have written pieces especially for her. She has given concerts in most countries of Europe as well as the United States and has made radio/TV recordings and CDs. Her rekord of works by Gottlieb Theophil Muffat (Componimenti musicali) won the renowned German Record Critics's award in Hamburg in 1992.

She is a founding member of the Hungarian Bach Society and president of its Foundation. She teaches at the Liszt Ferenc Academy of Music in Budapest.

A Word about the Instrument

The replica of the Michael Mietke's original Berlin 1710 harpsichord from the workshop of the builders Jan Bečička, Stanislav Hüttl and Petr Šefl , was used for the recording.

Mietke's original can be found at Charlottenburg château (Berlin). It is very likely that J. S. Bach played Mietke's instruments during his visit to Frederick the Great at the Prussian court. Theoriginal harpsichord has been restored several times and both its appearance and keyboard range has been partially modifi ed over time. When building the replica, our objective was to achieve the closest possible to the original intention of Mietke, including the use of brass strings, as in the original instrument before it was later altered. When comparing several harpsichord originále of various signifi cant German builders, we found that Mietke's instrument was best suited to our purpose of interpreting Bach's harpsichord music. His music is known for its colourful and dynamical diversity together with perfect composition architecture, which requires an instrument of interesting sound and suffi cient transparency. Only such an instrument is capable of suffi ciently distinguishing the complex abundance of Bach's masterly polyphony.