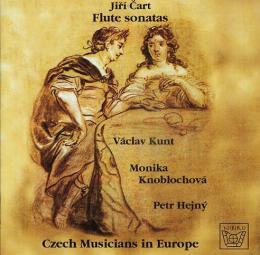 The composer is another member of the group of oustanding Czech musicians who were active all over 18th-century Europe, who ...

The composer is another member of the group of oustanding Czech musicians who were active all over 18th-century Europe, who helped to develop a new style of music - classicism - and who later fell into oblivion. A contemporary of J.V.Stamic and F.Benda, Jiří Čart served at the court of Berlin together with F.E.Bach, then as a violinist of the Mannheim orchestra and finally, after Stamic´s death, as its conductor. In his Sonatas for Flute, Čart remains half way between the style of Baroque and coming classicism. This is the first ever recording of the work.

Inadvertently enough, 18th century events in Europe turned the Czech Lands into a renowned reservoir of musicians. Anyone well-versed in musicianship could easily earn their living anywhere and escape from the sombreness of bondage. Hence, when the Wars of the Austrian Succession (1740-1778) broke out and the Czech Lands became a theatre of war and a major hunting ground for recruits, many a young man recollected his musical talent preferring to say good-bye to his native land voluntarily. In the neighbouring lands there were quite a number of princely courts just then busy setting up prestige bands, and good musicians were welcome there. Among the many composers who in those days emigrated from the Czech Lands to become integrated in the world of culture all over Europe we keep finding original personalities, whose music has always been waiting to emerge from general oblivion.

These included a brilliant violinist and composer, whose life of adventure could be read already from the many versions of his name - his contemporaries knew him as Cart, Czard, Czarth, Zarth, Zardt, Schardt, Szarth or Tzart. Today, his name is written in two different ways of entirely different meaning: while in German literature the spelling has been standardized in the form of Zart meaning „gentle, tender“, in Czech its present-day orthographic form is „Čart“, a vernacular variety of „čert“, meaning the devil. With respect to his fortunes in life and to his music, we, too, prefer the other variety.

Čart was born in the region of the Bohemian-Moravian Highlands where a number of outstanding musicians were raised - he was baptised at Vysoká near Havlíčkův Brod, formely Hochtanov near Německý Brod, on April 8, 1708. He was first taught music by Lukáš Lorenz, a cantor-teacher of Německý Brod, who later initiated into the world of music another famous fellow-countryman - Jan Václav Stamitz (1717-1757). Around the year 1725, we already come across Čart in Vienna studying the violin and flute there. His service in the band owned by Count Jan Jáchym Pachta or Rájov, a well-known patron of music, did not last long. This was because Čart chose to be one of the first, later on very much celebrated, Czech musicians who decided to try their luck in the world by breaking out of serfdom, a risky step to take then, indeed. Čart´s career started in Vienna in 1729 when he conspired with friend František Benda to cross the confines of the Hapsburg monarchy to Poland. This adventure is related in great detail by Benda in his autobiography: „Mr. Čart and I put some music and a couple of flauti traversi in an iron coffer, and also two violins and a few shirts; we then took turns in carrying this as I had changed, putting on different clothes, in order to avoid being recognized; at seven in the evening we set out on our journey, keeping, wherever possible, well clear of the land trunk road, and after several days we reached Wroclaw happily.“ Before long, one of their patrons sent them a message to say, „that warrants had been issued for the arrest of two Vienna musicians, and that, should we be those two, we were well advised to raise some dust behind us as soon as possible. There was no need for us to solicit an advice of that kind twice.“

In the end, they walked right up to Warsaw where, indeed, the Lord Mayor - Kazimierz Suchaczewski - offered them a good contract. However, much to his disappointment, both of them were soon invited to join the Polish Royal Band. From then on, their shared fortunes, as it were, copied the current dramatic changes in the map of Central Europe. After Poland had established a personal union with Saxonia, King August II hired the best musicians in Warsaw for his court in Dresden (1733). It is a moot point if Benda and Čart had made a good enough estimate of the subsequent course of events; nevertheless, a year from then, they accepted an offer from J. J. Quantz, a fine flutist of the day, and became members of a band run by Prussia´s Crown Prince Frederick (1734). No sooner had the prince become King Frederick II than he moved his court (and orchestra) to Berlin (1740), gradually to occupy both Saxonia and a part of Poland. Waging bloody wars on his cousin Maria Theresa, he made several attempts to take hold of the Czech Lands, too, thus, paradoxically, becoming responsible for the departure of so many fine musicians.

„Frederick the Great“ made history mainly as a ruthless warrior and founder of the Prussian military regime, later to reap the admiration of dictators and war criminals, yet in his day and time, he set great store by his reputation as a cultured sovereign and patron of arts. Oddly enough, he gave vent to his sense of culture in a way of his own during his invasions of Bohemia: apart from extorting protection money and recruiting conscripts, he issued orders to search for and arrest musicians for his bands. But then, even regardless of all this, his court orchestra enjoyed excellent conditions and remarkable acclaim. First-class instrumentalists and composers were in that number, such as C. P. E. Bach, J. J. Quantz or C. H. Graun. While Benda stayed on with the company for good, Čart said good-bye to his friend of long standing to accept an even more attractive offer. After the death of J. V. Stamitz (1757), he joined the Mannheim court orchestra, in those days second to none in the field anywhere in Europe. Stamitz had a lucky hand in bringing together many of his gifted fellow-countrymen in an ensemble which came to be compared to a laboratory testing new means of style typical of musical Classicism. His successor, first violonist „Čzard“, was paid a record remuneration of 800 golds; no wonder, he stayed on there, holding that position till his death.

To go by period references, Čart is believed to have authored symphonies, violin and flute concertos and sonatas. All that we know of his work today are a few sonatas for flute, two for violin, and two trios. Playing the violin is reported to have been his strongest point, yet what has been preserved of his production testifies to his mastery of the flute as well. This was then a most fashionable instrument increasingly favoured by composers for its advantages of technique and expression. Čart´s works for the flute can be seen as music halfway between late Baroque and early Classicism with signs of Italian and North German influence as well as with features shared by Czech emigrés. His music certainly tallies with what we know of his life and of himself as a musician of considerable temperament, originality and outlook. Even today, Čart´s sonatas give us the impression of a very viable brand of music not only for its technical brilliance but also for its sense of melody and rhythmic invention. Thanks to all this we can today enjoy a rare piece of music providing a glimpse into the world of a half-forgotten, yet undoubtedly very gifted and interesting composer.