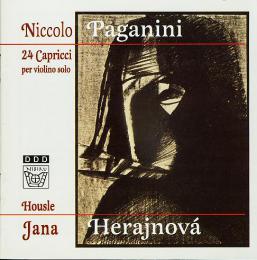 All of Paganini´s 24 Capriccios as played by Jana Herajnová, soloist of the Czech Nonet. The violinist´s way of interpretation ...

All of Paganini´s 24 Capriccios as played by Jana Herajnová, soloist of the Czech Nonet. The violinist´s way of interpretation together with her period Italian gut-stringed violin lend the recording the kind of authenticity that makes you feel like being at an early 19th century salon.

All of Paganini´s 24 Capriccios as played by Jana Herajnová, soloist of the Czech Nonet. The violinist´s way of interpretation together with her period Italian gut-stringed violin lend the recording the kind of authenticity that makes you feel like being at an early 19th century salon.

Famous virtuosos of the past left behind little that could be preserved. Their art is irretrievably gone, what remained were just memories of their contemporaries, critical assessments in the press - and also works which they had composed for themselves. Those are often the only credible documents of their artistic standard as they give evidence of their individual virtuosity. This is very much the čase of Niccolo Paganini (1782 - 1840). Europe was dazzled by his "diabolic" play and technical effects until then un-heard of. He was every inch a romantic musician in every sense of the word -from his interesting, indeed, fascinating appearance to his extraordinary interpretative abilities.He was an entirely new phenomenon on the musical scene - the phenomemon of virtuoso unknown to the 18th century. Brilliant play brought to the limits of perfection and elevated to the position of a romantic ideal became a challenge to many of his followers from then on. The 19th century became an era of virtuosi and not only those playing the violin. Yet, it would be a misconception to see Paganini as a matchless violinist only: he was also a sensitive, remarkably gifted musician, a composer of romantic temperament and excitability as can be seen from his many other works, e.g., string quartets, etc.

He showed a great aptitude for playing the violin already as a learner. He did not even need any speciál teaching guidance, short courses of training with Giacomo Costa in his native Genoa and with Alessandro Trolla in Parma were all he got. He remained, essentially, an autodidact who attained his high standard of violin playing through his own talent and effort. Already at the age of nineteen he was commissioned to lead a new orchestra in Lucca, and in 1805 he was engaged at the court of "Princess Elisa Baciocchi, Napoleon's sister, as a sólo virtuoso. It was also then - around the year 1805 - that he composed his cycle of 24 capriccios for sólo violin, long before he started his spectacular international concert career.

The capriccios show the degree of his perfection as a musician already in his youth. There was no match for them in all previous violin literatuře. True, mas-ters of the Baroque era had also composed works for sólo violin (Bach, Locatelli, and others), often for the purpose of instruction, but Paganinťs Capricci were the first to demonstrate an entirely new type of composition characteristic of the romantic flair. Even though Paganini's technical requirements introduce in his Capricci a number of new or newly exploited e-lements (two-voice trills, flageolets, left-hand pizzicati, play on the G string, diverse types of saltato, octave playing) they are not just dry etudes but works of distinct musical value in both their harmony structure and melodie inventiveness. Rather than fitting them in the circle of 24 major and minor keys (such as, e.g., Bach in his Well-tempered Cavier or Chopin in his (tudes and preludes) Paganini chose the keys ad lib with regard to their suitability for the violin technique. His Capricci left an indelible mark on I9th and 20th century music. Thus, the famous variation Capriccio in A-minor "No. 24 inspired, among other works, variations by Schumann, Brahms, Rachmaninov or Lutoslawski. The Capricci remained long in the manuseript form until 1820 when Ricordi of Milan set about publishing them and put them out as "Paganinťs o-pus "No.l. The composer dedicated the work to his colleagues violinists who, however, refused to accept it on the grounds that it was unplayable. It was only with advances in violin virtuosity that the Capricci came to be duly appreci-ated, and to this day they provide a chance to demonstrate the ultimate in the art of interpretation.

Jana Herajnová (1956) graduated from the Prague Academy of Performing Arts as a student of Trof. Alexandr Tlocek (1976-1980). Apart from that, she attended senior courses with Trof. Nathan Milstein in Zurich in 1979. Her own father, headmaster of the Nový Bor school of music, was her first teacher. In 1971, she started attending the Teplice conservatoire under the guidance of Prof. Jiřina Dlouhá. She took part in a number of contests at horne (first prize in the Beethoven Hradec competition in Opava 1971, and the Ševčík Competition in Písek, 1984) and abroad (diploma in the Tchaikovsky Competition in Moscow, 1983, finalist in the Markneukirchen Contest in 1983). She also worked as a music teacher at the conservatoires of Pardubice, Teplice and Prague.

Since 1995, she has been first violinist of the Czech Nonet apart from appearing as a soloist. Featuring prominently in her repertoire are compositions for solo violin (Paganini but also Isaye, Reger, Ernst, Luboš Fišer, Lukáš) and sonatas for violin and piano. As for present-day production, she has presented violin concertos by American composers William Thomas McKinley, John Biggs, and Jerome "David Qoodman (in co-operation with the American com-pany Master Musicians Collective).

Jana Herajnová first performed Paganini's Capricci, a work rarely heard at concerts, in Prague in 1994. The present recording was made in a record time of a mere four days according to Carl Flesh's critical edition. Her authentic instrument (a Felice Beretta violin of 1779) hélps to conjure up what Paganinťs era regarded as the ideál sound.